Meet PMA Project Engineer Yuan Zhang, a project professional who spent her formative years in the most rapidly growing construction market in the world. Here she shares her journey in discovering her passion for the construction industry.

When I was a student in China, I observed many different construction projects moving very rapidly. So, I just felt like I wanted to be a part of them. I thought to myself, “Who built these kinds of crazy buildings?” Consequently, I became interested in different aspects of construction and engaged in discussions with friends and teachers about them. Finally, I decided to study construction management in college. I earned my bachelor’s degree at Shanghai Normal University. Shanghai is a super-international city with many different kinds of buildings developed there. One of the most famous landmarks is the Oriental Pearl Radio & TV Tower, which is located by the side of the west bank of Huangpu River, opposite the Bund. Another famous landmark that impressed me is the Shanghai World Financial Center, which is the second-highest building in mainland China with a total height of 1614ft (492m). There are many other iconic landmarks to see in Shanghai. Living there made me feel how great it would be if I could be part of the teams who build these crazy buildings.

Was there a reason why you liked construction vs. architecture?

When I thought about it, I realized I am not good at drawing things. I do not have that much creativity, which is very important for an architect. I was also interested in the construction process: how a building can go from nothing, to a major playground installation, or to a tall building.

Did you have any interest before college?

No, my interest arose when I entered college and met some of my professors who worked in construction. So, I went to them to ask their opinion if it is a good field to get into for work, and they all said it is a good field. And I really like it. Then after I studied the courses for construction, I felt I would like to join this field to be an engineer on these types of projects.

Where did you receive your engineering degree?

I earned my master’s degree in engineering management at Northeastern University in Boston, Massachusetts.

Were there any major differences in learning about construction management in China vs. in the US?

The basic classes are quite similar. The project management courses, economics of construction, etc. are mostly the same.

So, when you decided to come to the US to study, why did you come to Boston, and Northeastern, specifically?

Like many college students in China, I wanted to go abroad to study and experience new things and face totally new challenges. I did some of my own research on which university has the best engineering college. I found that Northeastern was ranked very highly based on my research.

The location was also an important factor in my decision. I had not been to the US before, and I was coming here by myself, so I decided on Boston because it is a great city with so many great universities.

Did you have any other friends or classmates who had also gone to the Boston area to study?

I did make friends who came to study here, but when I arrived, I was alone. I mostly relied on Google and other searches to learn about the area. I like Northeastern a lot, and I do recommend others to come here if they ask for my advice about studying in the US.

Women are a minority in the construction field in the US: do you feel that this was similar in China?

Yes, of course, when I was studying, there were fewer women studying construction than men. I would guess there were twice as many men as women in my classes. In the US, in some of my classes, it was closer to 50/50, but still fewer women. 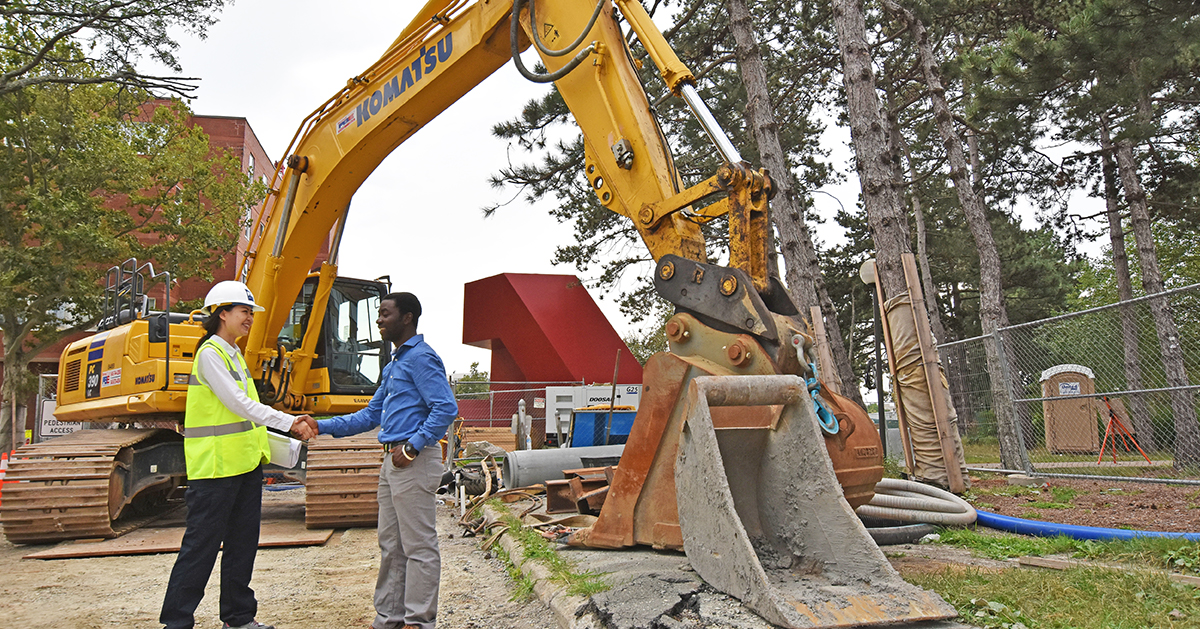 How did you learn about PMA?

After graduation, I attended a school career fair where I collected some business cards and gave out my resume. After that, I went online and searched for different companies and PMA was one of them. I do not remember who I met from PMA because there were just so many people that day and so many companies.

A few months later, I received an email asking if I had time for an interview, and I said, “Yes, yes!”

Have you worked with senior leadership since joining PMA?

Currently, I am working with Dennis Lucey, Managing Director for the Massachusetts Water Resources Authority (MWRA) project. I produce a monthly report and provide cost control effort and it is going well.

The people I work with are very nice and you have a lot of autonomy to manage your own tasks. When I have any questions, they are very patient in answering them and giving me help if I need it. When I worked for the Massachusetts Bay Transportation Authority (MBTA) task force projects and was using NetPoint for the high-level schedule summary, there were several problems that my team member helped me to solve, and now I can use NetPoint proficiently. 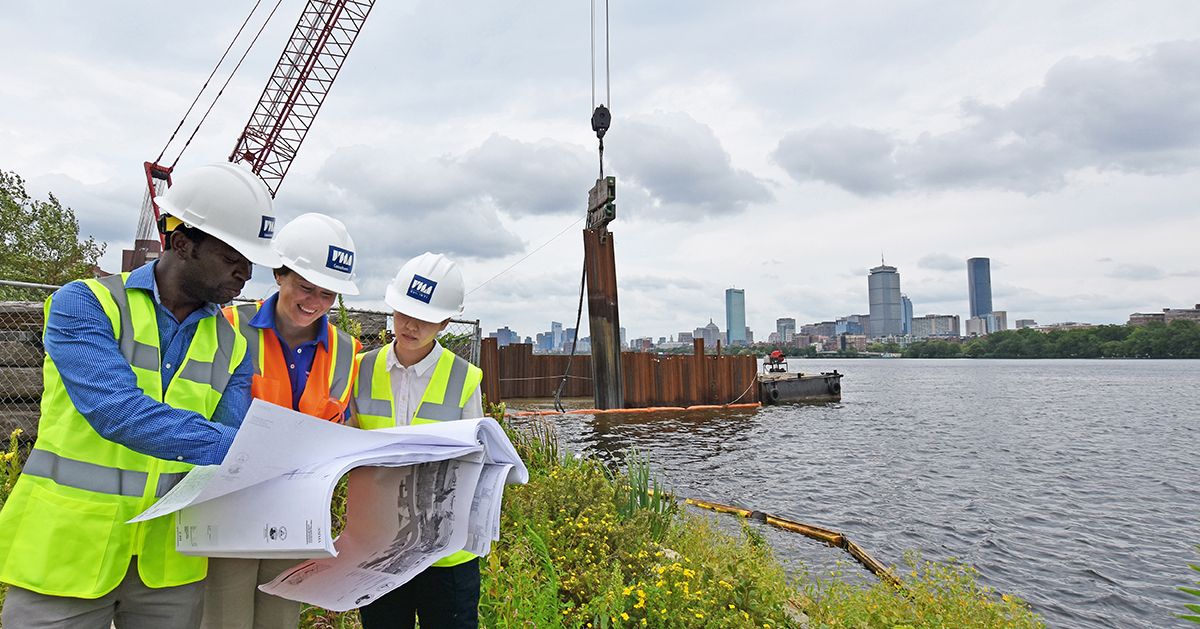 From working at PMA, have you found out what types of projects you like working on?

I like project controls, which is what I am working on now. I also like to be on-site to see construction actually happening. The areas that I am working on at PMA are a bit new to me, so I would like to dig more deeply into these fields too.

What have you worked on so far?

I have contributed efforts mainly focusing on developing project budget and cost spreadsheets, project schedule reviews, change order reviews, and invoice reviews. I also produce monthly reports and provide cost control for the MWRA project. I have been using e-builder frequently with the current MBTA task force project that I am working on.

What do you want to learn more about next?

I am interested in continuing to learn Primavera P6 and want to work more with scheduling. I also want to dig deep into learning even more about budget controls. Long term, I want to gain more experience in different aspects of the field to learn more about which types of projects I want to work on.

How would you describe PMA culture?

So far, the experience with PMA is great. I really appreciate the opportunities I have at PMA. I would say that people help each other. When I feel like I need help, others like to share their experience with me.

(Editor’s note: Northeastern University is listed as No. 31 in the 2021 Best Engineering Schools rankings.)

The global construction industry was predicted to grow by 3.1%. As the year progresses, construction…

Project controls encompass the processes and tools used to plan, manage, monitor, and…

When pharmaceutical, biotechnology, and medical device companies are expanding their facilities today for…

Construction in the Pharmaceutical and Biotechnology Sector

Deliver Successful Projects with a PMIS

How do you ensure schedule reliability? There are probably 50 different things to…

Warm-water capture reduces the need for duct heaters in the air handling system,…

From Shanghai to Boston: How to start a career in the Construction Industry

Value Engineering (VE) is a phased methodology used to analyze a product, project,…

Analyzing exhaustive, complex schedules is often overwhelming for non-schedulers. What if you could…

The Digital Transformation for Construction